The growth speed of crystalline GeTe into amorphous GeTe at high temperature was precisely measured by imaging the growth front with movie mode DTEM.

The first direct measurements of crystal growth in GeTe by pulsed laser irradiation enables quantification of the kinetics at technologically relevant time and temperature. 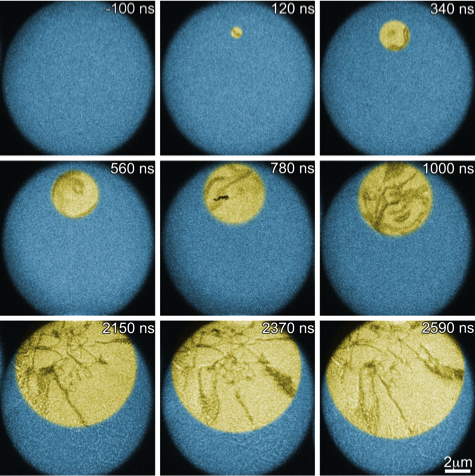 False color images of growth of crystalline GeTe (yellow) into amorphous GeTe (blue) in a series of 17.5 ns images during crystallization induced by a 12 ns laser pulse

Transmission electron microscopy (TEM) is used to reveal material microstructure and can be used to study dynamic processes. However, many processes propagate at rates far exceeding the temporal resolution of conventional TEMs. This includes phase transformations in phase change materials (PCM) used in optical recording media and non-volatile random access memory that take only nanoseconds. Crystallization is the data-rate-limiting process, and understanding crystallization during laser heating is important as it directly impacts device speed.

To study the rapid transformation, our research team used the Dynamic TEM (DTEM) at LLNL, which uses short, high-current electron pulses to image a rapidly reacting specimen. Recent developments of the DTEM enabled the generation a movie of a single reaction with multiple nanosecond electron images spaced over several microseconds. In collaboration with IBM researchers (who made the PCM material), the DTEM "movie-mode" imaged the transformation of amorphous GeTe during laser crystallization. This yielded direct measurement of crystal growth rates at the high temperatures and short times relevant to the function of PCM memory devices.

Note in the image that the exposure time for each frame is 17.5 ns and the absolute time at which the image is acquired is noted in each frame. The position of the interface as a function of time is the quantity needed for kinetic models.